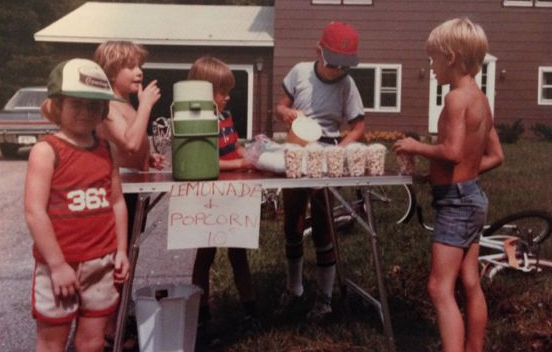 The entrepreneurial bug caught me at an early age…

I was nine, the summer was sweltering, and kids on their bikes were thirsty. Opening a lemonade stand made perfect sense. In no time, I had my mother squeezing lemons, my six-year-old brother out on his tricycle rounding up customers and a mate behind the counter.

Business was good for a while, but I soon learnt that lemons don’t grow on trees (at least in our neighbourhood), people don’t work for free, and you shouldn’t consume too much of your own product… for free.

My first exit was a lesson in reinvesting in my own business.

Come day two, my workforce had no incentive to get out of bed, I had squandered my takings on candy, and we had no lemons.

Still, the entrepreneurial bug had bitten…

Straight after I left school, I joined my father’s software business selling computer hardware. At the time, computer memory chips were in demand. We found a supplier, placed some ads in the paper and began shipping them out the door by the tray load. Over a few years, we built a thriving business selling computer components to multinational corporations. Then my supplier asked me to join forces, which meant leaving the family business.

My second exit was a lesson in partnerships.

Good offers come along. I took this one, but it had a devastating effect on my relationship with my father.

Over a period of three years, we grew the business…

Along the way, we brought on another partner. And it wasn’t long before we were getting offers for the business. When an offer for 20 million came in, my partners jumped at it. But the offer came with strings, essentially, I’d end up working in a division of a much larger organization—a living hell for an entrepreneur.

My third exit was a lesson in partnerships.

Inexperience had me in a partnership without a shareholders agreement. And I ended up leaving the trio without much to show for the work I had done over the past few years.

Still licking my wounds, I co-founded a startup…

We had the vision to create one of the first web content management platforms. From day one we were building to exit. I even worked nights to get an MBA this time around. We raised two million in the first round of financing, developed a viable product and signed clients including Anglo American, Investec Bank and Johnson & Johnson.

At least, that is, until the dot.com bubble burst.

My fourth exit taught me a lot. Mostly about timing and having a Plan B… and a Plan C.

When the dust settled, it was time to start over…

This time I built a stronger business. My plan was to exit with enough money settle in London and build a consulting business. After 5-years I sold to my businesses to my leadership team through an earnout.

My fifth lesson, while successful, was that earnouts don’t always go to plan.

I thought I had chosen suitable successors but was wrong. My earnout was never fully paid.

I have spent the past seven years working with business owners, helping them grow their businesses and develop exit strategies – because smart entrepreneurs always build a business today so that it could be sold tomorrow.